The ACG is accountable to its members who represent brands from across the world.

Founded in 1980, the Anti-Counterfeiting Group (ACG) is an international association respected as one of the world’s leading specialists in the fight against the growing global trade in counterfeit goods.

ACG is a not-for-profit trade association, committed to representing our members, in the UK, EU and on the global stage. Together, our members own over 3,000 of the world’s most prestigious brands and help to contribute over 45% (13 million) jobs and £650 million to the UK economy. Across Europe IP industries contribute 42% to the EU Economy (5.7 trillion Euros) and 28% of all jobs (60 million)

We are governed by an elected Council of up to 14 Directors, who are full ACG members. Council is responsible for the overall control and strategic direction of the ACG.

New directors are elected at the Annual General Meeting and existing directors stand for re-election after three years. The Council elects ACG's officers; the Chair, Vice-Chair and Company Secretary.

Chair: Shelley Duggan
Shelley joined Gillette in 1995 directly from law school and went on to qualify there as a trade mark attorney. Gillette was acquired by Procter & Gamble in October 2005 and Shelley has continued her work fighting counterfeits at Procter & Gamble, where she is now a Director and Associate General Counsel and the Global Brand Protection Leader. Shelley is an active member and supporter of several trade associations.

Company Secretary and Director General: Phil Lewis
Phil has been engaged in intellectual property enforcement since 2001 when he became the UK’s Senior Policy Advisor on IP Crime. Based at the UK Intellectual Property Office, Phil was responsible for developing and leading on the UK’s first National IP Crime Strategy. He was also the UK IP enforcement representative at G8 level and a member of the Northern Ireland Organised Crime Task Force. As part of his international portfolio Phil chaired the United Nations Advisory Group (UNECE) on IP protection and enforcement and was an adviser to the Interpol Action Group. He also led a number of EU Commission IP Peer Review Teams, assessing IP infrastructures and enforcement capacities in a range of EU succession and candidate countries. In 2008, Phil became Senior National Expert at the EU Commission, where he helped develop the Commission’s strategy against counterfeiting and piracy. He was also responsible for conceiving and developing the EU Observatory on IP Infringements of IP Rights, which has become the pivotal European network of experts engaged in shaping more effective IP enforcement policies and strategies. Since retiring from public service, at the end of 2014, Phil has been working as Policy and Strategy Adviser to the ACG. He is also a senior adviser on range of EU IP Enforcement Twinning projects, producing studies and key assessment reports on countries such as Serbia, Ukraine and Macedonia. In 2014, Phil was awarded the Global Anti Counterfeiting award for individual achievement.

Joint vice-chair: Mark Bearfoot
Mark Bearfoot is Legal Director - Global Brand Protection at Tommy Hilfiger Europe BV where he leads their global brand protection team and is responsible for the IPR enforcement and anti-counterfeiting strategy in more than 100 countries. Prior to joining Tommy Hilfiger, Mark worked for the Harley-Davidson Motor Company where he managed their IPR enforcement and anti-counterfeiting programme across Europe, the Middle East and Africa. Before that, he worked for The Coca-Cola Company where he assisted in the management of their intellectual property portfolio across the Europe region. Mark is an active member of the International Chamber of Commerce’s Business Action to Stop Counterfeiting & Piracy (BASCAP) and the American Apparel & Footwear Association’s Brand Protection Group. He is also a Council Member of the Chartered Institute of Trade Mark Attorneys and has previously served on the Board of Directors of the British Brands Group.

Director: Nicola Consterdine
Nicola is IP Protection Manager, Strategic Planning Department for Epson Europe BV. Nicola has worked in Brand Protection for over two decades, starting her career with Reebok International and then moving to Harley-Davidson Europe and ghd. She is a graduate in European Economics from Middlesex University, England and Nantes University, France and has been a Director of ACG since 2001.

Director: Sheila Henderson
Sheila is a UK qualified solicitor (1990 ) who has spent time working for Unilever in the UK and Netherlands, Mars, Reckitt Benckiser and is currently Chief Intellectual Property Counsel for the Richemont Group.

Our main mechanism for accountability to our members is the annual general meeting (AGM) held in May/June every year. 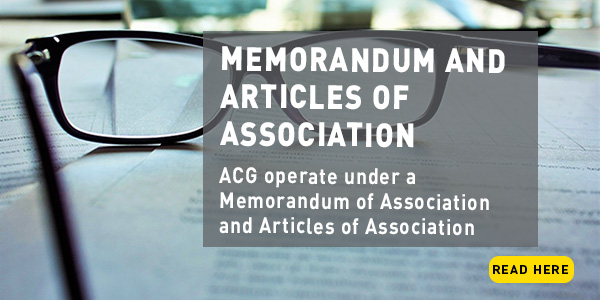