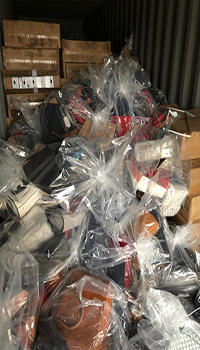 On Saturday 3 October the Anti-Counterfeiting Group (ACG) and brand representatives, along with Hertfordshire Trading Standards, National Markets Group for IP Protection (NMG) and Hertfordshire Constabulary raided an open-air market that is known for intellectual property infringement.

Bovingdon Market near Hemel Hempstead attracts counterfeiters from across the UK and sells a wide range of counterfeit and pirated goods. At the raid, 10 stalls where targeted which saw thousands of counterfeit goods being seized.

The types of goods that were removed included clothing, footwear, electrical, perfume, handbags, belts, purses, and badges. Not only were these goods counterfeit but they were potentially unsafe and had a retail value of £200,000.

Graham Mogg, Intelligence Coordinator at ACG and Chair of the NMG, took part in the action and commented: “Counterfeit products are not only bad news for consumers, but also for legitimate, hard-working local business owners who risk losing sales’’.

The raid action was a multi-agency approach and part of Operation Big Ben which has has been running since 2008 and supports market operators facing issues with the sale of counterfeit and pirated goods at their markets.